Ep. 17 | What Is a Hysteroscopy and Why Would You Need One?

The field of reproductive medicine is about much more than in vitro fertilization (IVF) or intrauterine insemination. Patients may require surgery for an array of uterine conditions, including fibroids, polyps, chronic endometritis, and Asherman’s disease. The good news is that many of these procedures, including a hysteroscopy, can now be done as outpatient procedures in the doctor’s office, making it more comfortable, less intimidating, and often less expensive than in the hospital.

In this episode, John Preston Parry, M.D., fertility specialist and director of Positive Steps Fertility, joins host Mark P. Trolice, M.D., to breakdown when women would need a hysteroscopy and how it is performed. Dr. Parry also discusses other diagnostic and operative procedures to detect and treat uterine conditions affecting a woman’s fertility. 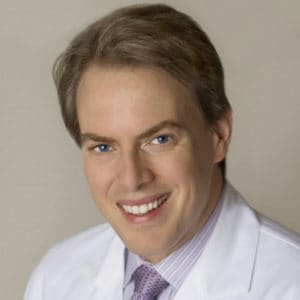 Dr. Parry is an American Board of Obstetrics and Gynecology certified reproductive endocrinologist, who is passionate about building families, fertility, hysteroscopy, and advancing women’s health.

Dr. Parry was a triple-major undergraduate at Cornell University in Chemistry, History, and Biology. He then went to Columbia University for a post-baccalaureate and a master’s in public health with emphases on clinical study design, epidemiology, and virology, and which led to a publication in the New England Journal of Medicine by age 25. This was followed by medical school at New York Medical College, a residency at Tufts, and an REI fellowship at the University of Louisville.

After training, Dr. Parry went to the University of Wisconsin, Madison, where he was associate residency director. Two years out of fellowship, he went to the University of Mississippi to become Division Chief for their REI program. After six years, he left to start Positive Steps Fertility and Parryscope Fertility, where he continues to practice.

Among other roles, Dr. Parry is secretary/treasurer for the Mississippi Chapter of the American College of Obstetrics and Gynecology. He is on the coding and technology committees for the American Society for Reproductive Medicine. He is also a board member for the Society of Reproductive Surgeons, overseeing the website and literature reviews for the society, as well as helping coordinate hysteroscopy education for fellows by the society. In October 2018, the live telesurgery at the ASRM annual meeting focused on state of the art for office hysteroscopy and was broadcast from Dr. Parry’s office. Finally, and for disclosures, Dr. Parry is the inventor of and has intellectual property rights relating to the Parryscope approach as a way of fusing ultrasound with hysteroscopy for gentle, accurate, safe, and fast single visit fertility testing.